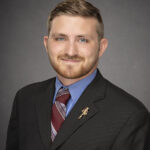 As a Texas native, HUNTER DUGIE attended the University of Texas in Austin to study Interpersonal Communication. He is currently a full time drill designer and choreographer working with groups across the nation. He has also worked as a technician for Vandegrift High School and Westlake High School.

His drum corps experience started in 2014, where he began his first of five years with The Cavaliers as a trumpet player. He served as Drum Major from 2016 until his age out in 2018.