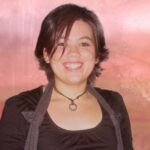 Lindsay Tanakaya was an enthusiastic performer, whose background included percussion positions at Lake Lindero Middle School, and a letterman at Agoura Hills HS. She graduated from Mt. Carmel HS in San Diego after two years in the Sun Devil Marching band, where she lettered in cymbals and snare drum. She also performed after high school with the Independent winter drumline Alternative Percussion “ALT” in San Diego as a member and section leader of the cymbals.

She had wished for years to play in drum corps, a super fan of the Santa Clara Vanguard cymbal section, and in her final year of eligibility registered to audition for Pacific Crest. Her doctors, however, would not sign off on her medical forms, and her dream to march PC ended before she could actually attend the audition in 2008. Suffering from a chronic condition most of her life, Lindsay passed away unexpectedly, one month after the 2008 DCI World Championships, never having marched on the drum corps field.

Although she was only 21 years old she was a testament to hard work, team spirit, friendship, and an intense love for musical performance. She was happiest on the field performing with her friends, and the only endeavor left unfulfilled in her life was to wear the teal and black as a member of Pacific Crest. She is buried in the family plot at El Camino Mortuary in San Diego close to her alma mater, in her prized possession – her “ALT” drum line jacket and championship cymbal section patches.

The Tanakaya family became involved with Pacific Crest several years ago through support of the cymbal section. The corps was raising money to buy new uniforms, and that season the Tanakayas donated the uniforms for the cymbal section. Russ spoke to the cymbal section of Lindsay’s story, and she soon became adopted in spirit by the members of her beloved section. Lindsay had a pet nickname, “Squirt,” after the baby turtle of the movie “Finding Nemo.”

She was always kind of tiny in stature, but fiercely loyal, and huge in heart. That year, the four PC cymbal players wore a small turtle pin on the collar of their uniform in her memory in their final performance at the DCI World Championship. For many years, the members of this group wore a new “turtle” each year, and in 2019, cymbal section leader Andrew LeMond wore four turtles on his collar at his final performance at the Indianapolis World Championship.

As an active staff writer and photographer for Drum Corps World magazine, Lindsay’s father Russ is part of the working press at about 10 world class competitions every season. As such, he is rarely found watching a show from the stands. In 2019 Russ and Lindsay’s mother Beth attended the DCI Southeastern Regional in Atlanta, GA, and Russ actually got to watch a Pacific Crest performance from the stands. That day, under the mentorship of Amy Lupsha, a cymbal section member, and Teresa Anderson, a tuba player, many corps members wore the traditional “Sharpie” tattoo of the Pacific Crest wave, and “LT” on their shoulders in Lindsay’s memory. As one member explained, “Lindsay may have never worn the ‘Teal and Black’, but she will be on the field, and will march with us in Atlanta today!!” This tradition has continued through several years, and is always an emotional day for the Tanakaya family to watch.

In Lindsay’s memory — and to honor the accomplished young people who are demonstrating empowering life skills in the corps and their communities — the Tanakaya family is pleased to offer annual scholarships to distinguished members of Pacific Crest Drum & Bugle Corps. These scholarship awards will help defer their tuition obligations for the season.