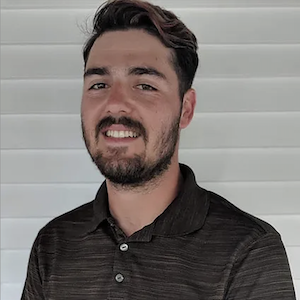 CORY SIMONICH is a percussionist originally from Joliet, Illinois. He was a member of the Blue Stars Drum and Bugle Corps as well as the WGI group Rhythm X. During his time as a marching member, he earned a degree in Horticulture and taught many different ensembles in his area. After earning his degree and aging out, he spent a few years focusing on teaching and playing disc golf.

Cory has held positions as Percussion Director at Joliet West High School, quad tech for Shadow DBC, and battery tech for Pi Percussion. In 2020 he was the caption head for Pi Percussion before the season was cut short. Returning for the 2021-2022 season, he took on the role of designer and writer.

Cory recently decided to go back to school to earn a second degree in Washington State. Currently, he is in his first year at Digipen Institute of Technology, earning a Bachelor of Science in Computer Science and Game Design. Cory hopes to relate what he learns in the world of Computer Science to his passions: disc golf, video games, nature, music, and teaching.