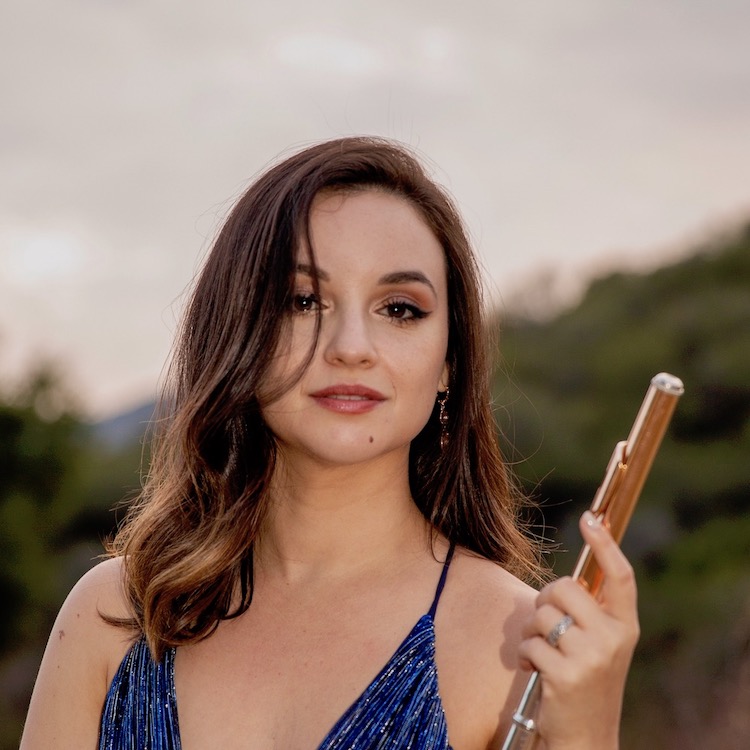 SHANNON CANCHOLA is a versatile flute performer from Southern California who has performed in a variety of different ensembles, including the Redlands Symphony, California Philharmonic, Kaleidoscope Orchestra, Los Angeles Sinfonietta, Desert Symphony, Valley Opera & Performing Arts, and NUMI Opera Orchestra. She has recorded and performed with many iconic musicians including Grammy Award Winner Ariana Grande, Grammy Award Winner John Daversa, Grammy Nominated Michel Weir, international cellist Tina Guo, youtube violinist Taylor Davis, and Iranian popstars Aref Arefkia and Leila Forouhar. Shannon has many commercial music credits for both recording and performing, including being a member of World of Warcraft composer Jason Hayes’ video game tribute band “Critical Hit.” She has also recorded for many films, albums, and theme park rides, and performed with Nintendo Company for their 50th anniversary of Super Mario as a hired musician, to name a few notable experiences.

In addition to her solo career, she has had numerous small ensemble performances with her chamber ensemble, ACE Trio. The trio won the 2018 Beverly Hills National Auditions chamber ensemble competition and has participated in a multitude of recital series including at the Brand Library, Music by the Sea Series in Encinitas, The Interludes in Torrance, Pasadena City College Guest Artist Series, and Wrightwood Classical Concert Series. In the summer of 2019, they were deemed the Music Teacher Association of California’s guest artist for their convention in Santa Clara where they performed a recital, held master classes and premiered a triple concerto composed by their own member, Ryan Glass, for the final concert. ACE Trio recorded their first album in the spring of 2020, featuring music by Astor Piazzolla.

Shannon obtained her MM in flute performance at Cal State Northridge studying with Heather Clark, where she won first place for the Cal State Northridge Concerto Competition. She obtained her BA at University of Redlands in flute performance studying with Sara Andon, and studied with Jamie Pedrini at Pasadena City College beforehand. In addition to performing, Shannon is also the Professor of Flute at Cal Poly Pomona University, Citrus College, and Los Angeles Pierce College, teaches an additional private studio at home, and holds weekly flute master classes with numerous high schools. In the springtime, she is also an official adjudicator for Music Teachers Association of California and for the San Diego Flute Guild Festival, and is continuously invited to give master classes to art schools and colleges throughout California. Shannon has been teaching privately for over a decade and her students have moved on to win principal positions in youth orchestras and honor bands, as well as winning positions in the Tournament of Roses Honor Band since 2016. Other students of hers have moved onto becoming music majors in many prestigious colleges including Indiana University.