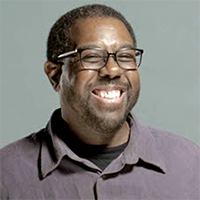 MARVIN “SMITTY” SMITH was born June 24, 1961 in Waukegan (Illinois). “It was a very natural inclination for me to play drums,” says Smith, known by many as Smitty. A glance at his early life validates that truth.

Born the son of a drummer, Marvin Sr., he was always surrounded by music in the house. At six months old, he would climb up on the large lounge chair positioned directly in front of his father’s drum set and watch him practice, intensely. Whenever his father took a break, he would crawl over and press the foot pedals and attempt to emulate his dad. That experience, and banging on pots and pans, was the extent of his playing until he began formal training at the age of three.

Today, Marvin Smitty Smith is a musician extraordinaire whose work has been described as a “comment on invention, firm and adventurous time and technical sufficiency.” He has traveled extensively throughout Asia, Europe, and the continental USA; and he has toured with varied musical artists such as Sonny Rollins, Frank Foster and Frank Wess, Art Farmer, Benny Golson, Branford Marsalis, Terence Blanchard, Sting, Dave Holland, M-BASE, Kevin Eubanks, Norman Brown, and Dean Brown. He is a former member of the Ron Carter Quartet, the New York Jazz Quartet, the Art Farmer/Benny Golson Jazztet, Steve Coleman and Five Elements, the M-BASE Collective, the Dave Holland Quintet/Quartet, and is currently a member of the Kevin Eubanks Group, and co-leads the Swingin’ and Groovin’ Collective, with Jacques Lesure.

Smitty conducts seminars and clinics for students in jazz workshops, both in the United States and Europe, and was on staff of the jazz program at the Banff Centre of Fine Arts, Canada and Drummers Collective, New York City. Smitty has been Downbeat Critics’ Poll winner for Talent Deserving Wider Recognition from 1985 through 1987, and again in 1989. Smitty performed on the soundtrack of filmmaker Spike Lee’s “School Daze” and the film “This Christmas”. He also appeared in Sonny Rollins’ documentary “Saxophone Colossus” and was a member of Sting’s “Nothing Like the Sun” South American tour, 1987.

Regarded as a well-rounded musician with the ability to play all styles, Marvin Smitty Smith is a formidable composer and arranger, and his success has earned him two albums as a bandleader: “Keeper of the Drums” (1987) and “The Road Less Traveled” (1989). Smitty relocated to Los Angeles in 1995 and worked as a member of the Tonight Show Band under music director Kevin Eubanks from 1995-2010. Since then, he’s toured and/or recorded with Azar Lawrence, Norman Brown, Delfeayo Marsalis, Jacques Lesure and Dean Brown, and composed two songs on Dean Brown’s 2012 release, “Unfinished Business”, as well as two songs on Dean’s 2015 release, “RoLaJaFuFu”. As a versatile drummer, there seems to be nothing he cannot do. It’s been said that he is the “John Coltrane of the drums.”