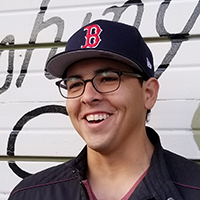 JOSHUA ADAM has been a part of the percussion community since 2001. He is currently the Captain Head at West Covina High School, and has been a musician with the Disneyland Resort since 2011.

For a short time from 2017 through 2018, Joshua worked as a Parade Operations Specialist in charge of the daily operations at the Disneyland Park and Disney California Adventure Park.

He is currently studying to be a Mechanical Engineer at Citrus College.