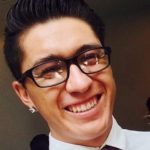 ANDREW FRESQUEZ spent his drum corps career at Pacific Crest, playing baritone from 2014-2016, and moving on to take the role of assistant drum major in 2017 and served as the Head Drum Major during his age-out season in 2018. He also served as a Drum Major for the 2019 Pacific Crest Rose Parade Ensemble.

Andrew is currently studying Music Performance on Bass Trombone at California State University, Fullerton. After, he plans to pursue his teaching credential. He also holds an A.A in Music and Social & Behavioral Studies from Riverside City College.