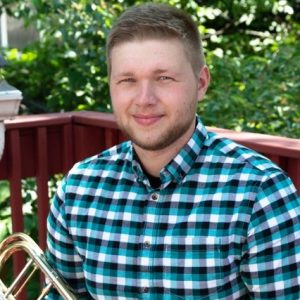 DAN BLEVINS is an educator from Columbus, OH and is a graduate of the University of Cincinnati College-Conservatory of Music with a bachelor’s degree in Music Education. He marched with the Madison Scouts Drum and Bugle Corps for four years and was a member of the brass staff from in 2017 and 2018. As a member of the brass staff, he was recognized for his Instructional Innovation and Instructional Excellence.

During his time as a marching member, Dan was a trombone and baritone soloist for the 2015 and 2016 productions and was a DCI Performers’ Showcase champion for the 2015 and 2016 summers. He was also awarded first place at the Wright State University Trombone Festival in 2015, was a featured soloist at the 2015 Ohio Music Education Association Conference, and was a member of the Zinzinnati Trombone Quartet.