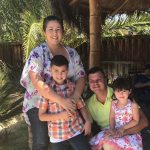 Craig and Daisey Hilbun met for the first time at Pacific Crest’s Memorial Day Camp in 2000, although had already marched together in the Tournament of Roses parade that year.  Craig’s sly introduction of “Hi, I’m Craig” led to a friendship between the two throughout the season.

How has Pacific Crest impacted your life outside of the activity? 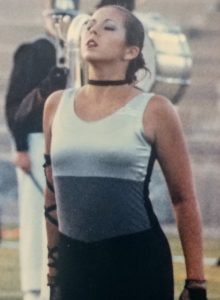 Daisey: I fell in love with [drum corps] pretty quick; it was a big change from high school winter guard to a grand scale within two weeks. [But] I guess that’s the best lesson I learned: how to jump into something and go, without asking questions, just go with the flow. It was pretty fun.  Now I get to see many alumni [whom I’ve known] from when we were teenagers.  We all have kids and are buying houses. That’s my favorite part so far in how [Pacific Crest] has influenced me.

Craig: [All] the relationships that were created have lasted and are going to last forever.  After drum corps, I [started] teaching percussion and knowing people in the activity helped because it was nice getting gigs. The lessons that I have learned have really helped me in being a realtor: working hard, being persistent, paying attention to detail; overall, striving to be better every day at what you do.

Who influenced you most at PC?

D: We had a lot of great movement instructors and definitely made me want to pay attention to that a lot more. It was fun. PC was really the jump off point for everything that I have done afterwards. The first instructor that I had was Peter Gomez in 1999 and he changed how I looked at color guard, I used to think it was just a high school thing and he really changed how I approached the activity. I took it a little more seriously, realized how much I had to offer.

C: At PC, there were a lot of great people. The most influential would have to be Brian Stockard.  He was the guy that showed me there was a different way to approach things through his positive attitude and ability to always have fun, but [he] pushed us to be better, to get better every day. 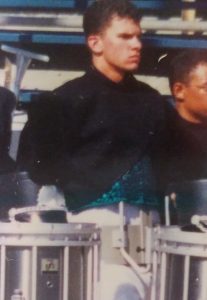 What was your favorite part about marching with PC?

D: I really liked when PC had the dark shows. We did Dracula my first year; I got hooked with that one. [Another] favorite part about PC was hanging out with people and the comradery, we were all very tight.

C: I remember one of the first shows in 2001, we were less than a point in percussion behind another corps. Brian [Stockard] kept pushing us, “You guys can do this, you guys can get them.” We really pushed hard. We went up to Oregon then Washington and I remember each show we would get closer and closer, we never took them but it was still a good time.  We tried to get better every single day at rehearsal – it was fun!

Craig and Daisey currently work as realtors for Hiltop Realty powered by KW The Lakes. They reside with their two children, Ethan and Norah in Lake Elsinore, CA.  Daisey has volunteered on the Pacific Crest Social Media Team, and Craig is a member of our Golf Tournament Committee.  Both are excited to become more involved with the corps in future years.