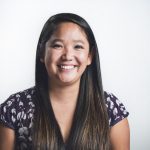 BRIANNE KIKUCHI is an instructor in the Southern California area.