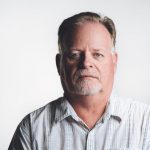 GLEN CROSBY has been in the marching arts since 1980. Over that time, he has held various roles from a tenor instructor to program coordinator with numerous DCI, WGI and BOA groups. He has been extremely fortunate to work with some of the most influential cast of characters involved in the activity, (time to name drop) including Ralph Hardimon, Thom Hannum, Murray Gusseck, Jim Casella, Tom Aungst, Scott Johnson, and Tom Float to name a few.

He spent 4 years (1981-84) as a member of the Blue Devils, then moved on to instructing The Cadets in 1985. Next stop was the Santa Clara Vanguard, where his largest growth as a teacher occurred under the tutelage of Ralph Hardimon. In addition to his work in drum corps, Glen has also been involved with the indoor percussion activity, having spent 10 years with Pulse Percussion from 2009 to 2019; working with Ian Grom and John Mapes.

Currently, Glen’s schedule involves being Program Coordinator and Percussion Director for Pacific Crest Drum Corps, and drum line instructor for the UCLA Marching Band. After decades in the activity, he still finds great joy in teaching students of all ages and experience levels.

Glen’s teaching philosophy is guided by his belief that music offers the opportunity to impart life lessons through ignition, deep practice, and master coaching. Whether it is students with special needs, professional musicians, or any student, Glen’s approach to teaching is based on process, patience, and persistence.