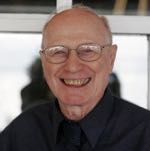 Pacific Crest has lost its founding Board Member, Dr. Martin Rochford, who passed away earlier this week after a battling a long illness.

Dr. Rochford purchased Pacific Crest’s first set of brass instruments in 1993. He continued to support the corps in those early years by purchasing its first set of uniforms and additional horns as the corps grew in size. He donated all his purchases to the corps.

Martin’s son, Greg Rochford, was a founding instructor at Pacific Crest, one of the original six who started the corps (Martin and Greg Rochford, Stuart Pompel, Dale Leaman, Carter Schuld, and Lisa Henderson.)

“Without Martin’s initial gifts, there would be no Pacific Crest,” according to Executive Director Stuart Pompel. “It’s as simple as that!”

Dr. Rochford attended nearly every post-season banquet since 1993. “It was only in these past few years that he was too ill to attend,” said Pompel.

Rochford was a man of generous spirit and enthusiasm, and he had a wicked sense of humor. He supported and encouraged his children (three sons and a daughter) to pursue their own passions. Greg, Steve, and Lori all pursued careers in music, and Jeff is a professional artist.

He spent many years at Fullerton College as a Biology professor, and as such touched the lives of many. As per his wishes, his body has been donated to science so he can continue his educational calling.

Pacific Crest has, indeed, lost a giant. Dr. Rochford will be dearly missed.

In 2013, Dr. Rochford was interviewed as part of Pacific Crest 20th Anniversary Video. You can see the video below: