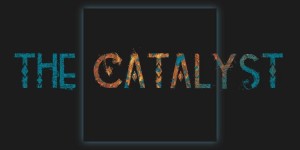 A mysterious artifact has arrived. We aren’t sure where it came from or why it is even here. We call it The Catalyst.

A catalyst is an agent that provokes or speeds significant change or action; as the performers react to it, the music changes from dark and aggressive to light and regal. And like a chemical catalyst, this one also changes as it reacts to the performers.

The production is developed around Eric Whitacre’s vocal transcription of “Enjoy the Silence” by Depeche Mode. Whitacre’s treatment of this tune feels both haunting and hopeful. Its atmosphere at the beginning of the program is eerie and unsettling. By the end, it feels positive and optimistic.

Placed around it are musical works by Prokofiev, Uematsu, and Ticheli, which reflect the reaction initiated by The Catalyst as the show progresses from chaos and conflict to an optimistic and consonant resolution.

CATALYST: an agent that provokes or speeds significant change or action.

Angels in the Architecture, by Ticheli  |  Listen –>