Anthony Pultz performed with Pacific Crest in 2012 and 2014. He got the chance to perform alongside his brother, Dominic, and aged out after the 2014 season.

Tell us about your background and family:
I was born in Rockville, Maryland, and lived their for a good part of my childhood. I have a younger brother, Dominic, who is also a member of Pacific Crest. My parents, Steve and Kelly, are active volunteers here. 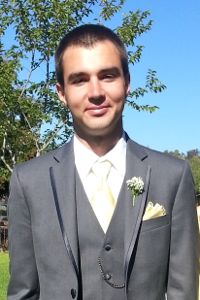 The main reason for joining Pacific Crest in 2012 was because my brother was performing there, and I wanted to see if I was good enough to make a spot.

How did the Pacific Crest experience impact your life?
The Pacific Crest Experience helped me realize how far I could push myself mentally and physically even when my body was exhausted.  The best example was one visual basics block when the staff had us do four-to-a-hash exercise.  They kept increasing the tempo  — ultimately to 210 beats per minute! By the end I could hardly demonstrate the technique but found the strength to keep pushing through. I know that I will be apply this level of tenacity to my future educational and career goals. It’s the biggest take-away for me.

Is there something you’d like others to know about Pacific Crest?
I just want to  say how thankful I am for getting to march and age out with my brother.  I am extremely proud of him. Pacific Crest is going places, and everyone should want to be a part of it.