Mira Costa was selected as one of the top three U.S. public school music programs in the country and will be awarded a $5,000 monetary grant to benefit the music program. The GRAMMY Foundation’s Signature Schools program recognizes top U.S. public high schools that are making an outstanding commitment to music education during an academic school year. 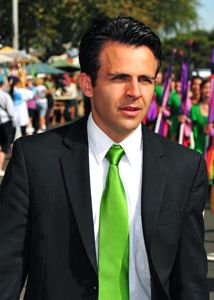 “We were deeply honored to receive this award,” explained Carlson. “It illustrates the collaborative effort of our entire district music faculty, as well as our community, in building a music curriculum that allows for such excellent bands, orchestras, choirs and more.  For my part, I can say without question that the lessons I learned about persistence and excellence at Pacific Crest have helped me to pursue goals with diligence. I am never satisfied with anything less than my best efforts, a philosophy I now have the joyful opportunity to pass along to my students!”

The music program at MCHS is rooted in a tradition of and a commitment to comprehensive music education through performance. The core of the MCHS Music Program for wind players and percussionists consists of four performance ensembles which meet during the school day: Concert Band, Jazz 1, Symphonic Band, and Wind Ensemble. Additionally, students have further performance opportunities with the marching ensembles, after-school Jazz bands, Percussion Studio, and Orchestral Winds.