Hobie Lindholm is in his second year with Pacific Crest, and was recently announced as the corps’ drum major for the 2014 season. He will be assisted by veteran member, Dakota Chavez, and first-year member, Tyler Piper. 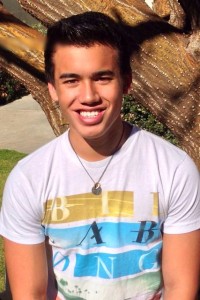 What brought you to Pacific Crest?
I learned about Pacific Crest from Chris Fossmo, my band director at Lakeside High School, who encouraged me to attend the Drum Major Camp in 2012. After spending three days with the corps and attending “Corps at the Crest San Diego”, I knew I wanted to be a part of Pacific Crest.

How you do you think your Pacific Crest experience will affect your future goals and/or plans?
Touring the country and spending countless hours rehearsing — while working together with other members to produce an amazing show — is an indescribable and life-changing experience. It’s incredible how quickly a strong sense of camaraderie is built, and I’m thankful for the numerous friends I’ve made here.

On tour, I discovered a whole new level of what a person is capable of doing, while learning to trust that those around me are also pushing themselves beyond their own previously conceived limitations. Performing in drum corps has made me appreciate the small things. like a hot shower and pillow-top bed! All these minor discomforts, however, pale in comparison to the memories, including the highlight of appearing on the “Big, Loud, and Live!” cinema broadcast for the first time ever. As an assistant drum major last year, I was fortunate to see the stands of thousands of people going crazy at their favorite parts of the show, and unanimous waves of the standing ovations. The payoff for all of our hard work reveals itself during moments like this, making every second of tour worth it and more.

How have you applied the experience to your life outside of drum corps?
The Pacific Crest experience has given me valued insight about my future. Of course, I know I’ll be spending by my next few summers with PC. After being in a leadership position, working towards a common goal with others, I gave much thought to how I could incorporate this into a future career. This year, I joined army ROTC at UC San Diego, while studying aerospace engineering, and I hope to commission as a Second Lieutenant in the Army after I earn my degree.

Can you share your goals for the corps in 2014?
For our new members (I’m trying to meet you all, so come up to me and say, Hi, if I haven’t met you yet) and also for returning members, I have an open-door policy. Please talk, text, or Facebook me, especially between camps if you need some advice or a sympathetic ear. Tour can be stressful, and if their are any issues, I am available to help find a solution. I will not ask anyone to do anything I would not do myself; I am going to give all my effort to putting the best show on the field every performance; and I hope my example inspires all our members to do the same.