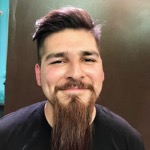 Rudy has taught the visual programs at several high school bands in Southern California including, South Hills, Azusa, Gahr, Sunny Hills, and is currently teaching at Monrovia, Gladstone, and La Canada High Schools as visual caption head. Rudy has served as a tech on the visual staff of Pacific Crest from 2012-2015 and moved into an Assistant Caption Head role for 2016-2017. In addition to teaching Pacific Crest, Rudy also had the privilege of teaching on the Cavaliers visual staff from 2013-2015.