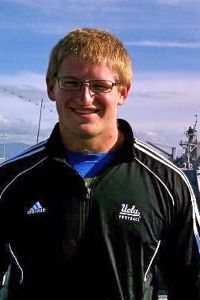 What brought you to Pacific Crest?
I joined Pacific Crest as a way to take my passion for the marching band activity to highest level.  I heard about the corps from one of my high school instructors who had marched in 2005 and 2006.

How has Pacific Crest impacted you?
Pacific Crest definitely changed my life.  It taught me how to be motivated, tenacious, and successful.  Not only have I made my best, lifelong, friends through the corps but I also have learned more about marching, music, and life in general, than I ever thought possible.  It has been the greatest opportunity to perform in front of thousands of people over the course of one summer.  The most impact comes from the relationships I have built with the people with whom I’ve performed.  The members I started with in 2009 are now my brothers and sisters and my best friends.

How have you applied the experience to your life outside of drum corps?
I have studied kinesiology and sports medicine at UCLA, and would like to someday apply that knowledge to the drum corps world and help optimize athletic performance for such a demanding activity.  After performing, I would really like to be an instructor either for a high school marching band, a drum corps, or both.  My experiences at Pacific Crest have also taught me that I can be successful at anything I put my mind to.

Final Thought:
Any drum corps provides an incredible and unique experience to it members, but my favorite thing about Pacific Crest is the family atmosphere here. I’ve seen so many changes in the corps since I started, but one thing that has stayed the same is that the people I have marched with have become the best friends I could ever ask for.