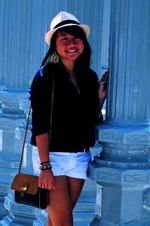 How has Pacific Crest impact you?
I actually didn’t know what I was getting into when I joined Pacific Crest. I had a vague idea of what drum corps was from the videos my band director showed in class, but I never expected auditioning at, let alone making it in, such a competitive ensemble. Pacific Crest pushed me outside of my comfort zone and challenged me to go beyond my limits. Overcoming the emotional and physical struggles during my first year made me realize I had the capacity to endure and handle much more than I imagined possible. Drum corps changed my perspective on life and helped me realize the value in the small things I used to take for granted. I formed some of my closest friendships at PC.

How have you applied the experience to your life outside of drum corps?
Pacific Crest gave me the discipline as well as the desire to strive for greater goals. Some days when I feel lazy I remember forcing myself to get up for rehearsal days no matter how tired I was, and now I motivate myself in the same way rather than procrastinate. I also gained experience working with members and staff at a professional level and I learned the importance of cooperation and hard work towards a common goal. I apply the sportsmanship and perseverance I had during rehearsals to my everyday schedule whether it be at home or at school.

Final Thought:
The thrill and adrenaline from performing on the field is a reward in itself.