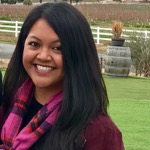 ANTOINETTE KVETON grew up in the San Fernando Valley and discovered her love for the marching arts during high school as a color guard member. Her alma mater, Chaminade High School, gave her the opportunity to begin teaching in 2008 after her first marching season with Pacific Crest. She continued to teach during the off season, while also completing her B.A. in English from Loyola Marymount University. After aging out in 2010 and graduating in 2011, Antoinette had the pleasure of working with several color guard programs in Southern California, including El Dorado, Whitney, St. Paul, and Gladstone High Schools, as well as Pacific Crest Drum and Bugle Corps.

In 2013, Antoinette’s roles shifted from instruction to serving as a member of the administrative staff, touring with the corps as a Tour Manager/Administrative Assistant during the summer. Her administrative involvement has expanded to the annual Drum Major camps, where she serves as a leadership clinician and logistics manager.

Antoinette serves on the Board of Directors for PCYAO and is currently the chair of the Alumni Committee of Pacific Crest. She works full-time as the Operations Manager for Northeast Community Clinic in Alhambra, CA. She holds a M.S. in Project Management degree from the University of Southern California.