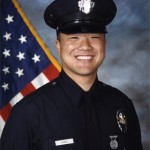 Howard Hsu was a member of the Pacific Crest Drum and Bugle Corps from 1994, 1996-1999. During these seasons he attended the University of California Santa Barbara and received a Bachelor degree in both History and Geography. Howard returned to PC in 2000 as a visual instructor and was proud to see Pacific Crest finally travel outside of California for the first time.

In 2003 Howard entered the Los Angeles Police Academy and began his career as a Police Officer for the City of Los Angeles. Howard has been assigned to a number of positions throughout his career. He began with Patrol in Wilshire and Southwest Areas then moved to Traffic Collision Investigation for West Traffic Division. In 2008, Howard was assigned to Emergency Preparedness Unit and worked on Tactical Planning for Emergency Operations Division. Howard is currently assigned to the Special Events Unit at Central Area. Here he works with a wide variety of activities in the Central City Area, from any First Amendment event to a major event such as the Emmy and Grammy Awards ceremonies. Howard has also recently accepted an assignment with the LAPD at the Los Angeles International Airport. Here he will serve as the Emergency Preparedness Coordinator for one of the busiest airports in the world.

Howard is married to his high school sweetheart, Claire and father of Benjamin and Annabelle. Howard was elected to the Board of Directors in December 2011 and was then elected as Vice President in January 2012.