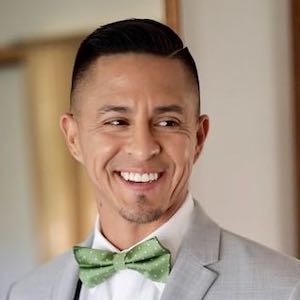 GARRET LOPEZ has been involved with the marching activity for over 25 years as a musician, color guard performer, clinician, and educator. He has been part of the visual education staff at Pacific Crest for almost a decade and is excited to be part of this program once again.

An alumnus of Chino High School, he performed on clarinet, baritone, oboe, and saxophone. Garret began teaching at his alma mater in 1997 and continued to work there as an educator for 14 years, with 12 of those years spent as visual caption head. He has worked with various other high school programs in the region and is currently in his 12th year on staff with the Chino Hills HS marching band.

Garret spent five summers as a baritone player with the Santa Clara Vanguard from 1997-2001, winning a DCI Championship in 1999. In addition to his experiences as a musician, he also honed his color guard skills performing with Solution Performance Ensemble World Guard in 2001 and Fantasia World Guard in 2002, 2003, and 2006, winning two WGI gold medals.

Most recently, he earned his MBA with a concentration in Healthcare I.T. and is now working towards a degree in clinical informatics. He is a currently an employee at Inland Empire Health Plan (IEHP) and resides in Azusa. Garret enjoys cooking, traveling, staying healthy, and volunteering his time to give to those in need, and is an advocate for suicide prevention and education and helping those that struggle with their mental health.