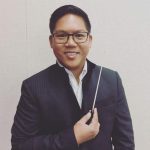 Glen Guevara performed with Pacific Crest from 2000 through 2003, and in 2005. During these years, he was able to see the corps transition from a Division 2 corps to Division 1, now called World Class. In addition, he was in the corps when it first travelled out of state and when it performed for the first time in DCI history in the World Championships in Orlando, Florida, in 2003.

I auditioned for Pacific Crest in 2000 but was made an alternate. A few weeks later, I received a call from Stuart Pompel saying that a spot had become available. During my years with Pacific Crest, I learned so much more than music; I learned what it is to be a human being. Because of Pacific Crest I was able to instruct and arrange for many front ensembles throughout the Los Angeles, Ventura, and Kern County areas: John Marshall H.S., Granada Hills H.S., Valencia H.S (Santa Clarita), Simi Valley H.S., West Ranch H.S(Santa Clarita)., La Canada, S. Pasadena, Cypress H.S., Liberty H.S. (Bakersfield), and Delano H.S. (Delano, Ca.). I also was the instructor and arranger for VIBE winter drumline and VIP winter drumline located in Bakersfield, California.

I was born in Los Angeles and currently live in Bakersfield. I attended John Marshall High School in Los Angeles where I was introduced to drum and bugle corps by my Band Director, who had marched with Madison Scouts from 1987 through 1990. I received my B.A. in Music Education from California State University Northridge, with an emphasis in percussion, and am currently completing my credential at California State University, Bakersfield. I also plan to pursue my Master’s degree in education and conducting.

For the upcoming academic year, I have been selected as the new Instrumental Music Director at Delano High School in Delano, California. Thank you Pacific Crest for your values and musical experiences that you shared with me. Have a great 2009 season!