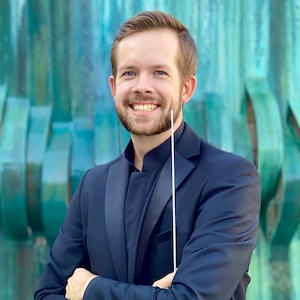 PETER BEMENT is an educator, conductor, and French Hornist born and raised in Southern California. Currently in his first year as a graduate conducting student, Peter is pursuing a Masters of Music (M.M.) in Instrumental Conducting at California State University, Fullerton under the tutelage of Dr. Dustin Barr. Originally hailing from Rancho Cucamonga, California, Peter holds a Bachelors of Music degree in Instrumental Performance on French Horn from the same institution, and completed additional studies focusing on instrumental music education and conducting in his time there. He currently serves as Visual Caption Head with the Rancho Cucamonga High School marching band, and has served as a visual and music tech for numerous schools in and around the Southern California region.

Having previously attended Riverside City College before completing his initial degree, Peter’s performance experience includes a wide range of orchestral, wind band, and theater ensembles. Additionally, Peter performed with Pacific Crest Drum and Bugle Corps in 2015 and the Crossmen Drum and Bugle Corps in 2017, and has worked as a staff member with the Idyllwild Arts organization in past years.