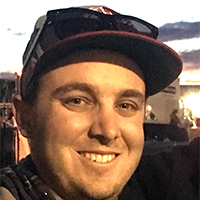 ERIC BRIGGS began playing percussion at an early age, continuing his music education while attending Hoover High School in Glendale, CA. During his time at Hoover he performed in multiple ensembles including the marching band, concert band, symphonic orchestra, and jazz band. While in the marching band he played a variety of roles and instruments, including serving as one of the drum majors his senior year.

Upon completing high school, Eric enrolled at the University of California, Los Angeles, earning his degree in Political Science. He was a four-year member of the UCLA Marching band, performing on bass drum. He also played with the UCLA Symphonic Band, Percussion Ensemble, and Kyodo Taiko, a student run Japanese drumming group, serving as one of the directors his senior year.

He has remained active in the youth marching arts by working on the administrative teams for the Pacific Crest Drum and Bugle Corps and Pulse Percussion. Eric continues to work with Hoover High School as a marching percussion instructor, a role he has filled since 2016.

In his work away from the marching arts Eric serves the city of Glendale as a Paramedic with the Glendale Fire Department and American Medical Response in Ventura County. Eric currently resides in Glendale, CA.