Tell us about your background and family:
I grew up in Thousand Oaks, California, and have been here for almost all of my life.  I have two siblings, Maggie and Doug, and am the youngest of the three. 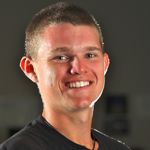 The first time I saw Pacific Crest was at “Corps at the Crest Walnut” in 2009.  I enjoyed the show, and loved that Pacific Crest represented Southern California. It felt like my “home team.” As all the horn lines performed that night, I was amazed at the sheer power that a drum corps can produce. I had seen videos and heard recordings before, but in the stadium the energy was palpable. After that night, I was hooked. I listened and watched whatever drum dorps I could get my paws on. I fell in love with the sound, and wanted to be part of it. When December rolled around, a few older high school friends were headed down for PC’s Experience Camp and invited me to come along.

How did the Pacific Crest experience impact your life?
Drum corps has made me the man I am today. Something I always keep in mind is that I have a responsibility to others. I know my co-workers, friends, and family all depend on me to continue striving to improve myself.

That personal philosophy took root in my rookie year. At the January camp I had an unforgettable conversation with the visual caption head at the time. He said  I wasn’t fit enough to keep up with the rest of the corps, but he believed that I could get to that point. I probably seemed scared at the time, but it was incredibly motivating. No one had ever told me I COULD get to be in better shape. They had just told me how bad a shape I was.

I lost 60 pounds before that season. When I didn’t feeling like running, I told myself there were people in better shape working harder for the corps, and I owe it to them to do what I can. Five years later, I still remind myself that I’ve got a promise to keep with the rest of the corps members: To push through any challenge that the show, staff, and environment throw at me. To me, the best part of the experience is that I can say I have done things I never would have been able to do without my brothers and sisters at Pacific Crest at my side.

How you do you think your Pacific Crest experience will affect your future goals?
I always want drum corps in my life. I enjoy teaching marching band and music, and am interested in a career in music education. I would love to inspire just one person the way all my teachers have inspired me. Of course, I have a lot more to learn, but it is something that truly motivates me. No matter what I do, my experience at PC has taught me that to achieve something great, you must work at it.

Is there something you’d like others to know about Pacific Crest?
DO IT! As someone who has marched five years, I’ve seen people mature before my own eyes. The challenges you will face at PC make everything else in your life look easy, and along the way you’ll meet great people, perform an awesome show in great venues, see some interesting places, and have a ton of fun. There’s nothing better you could do for yourself.